Beekeeping mayor a honey to the poor 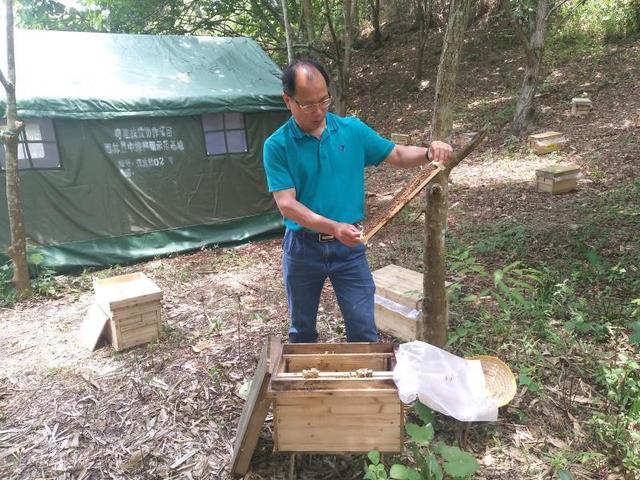 Chen Wenzhi has been nicknamed "The Beekeeping Mayor" for his dedication to the development of beekeeping industry in Xilin County.

A Shenzhen official designated to aid the poverty alleviation work in Xilin County, Guangxi Zhuang autonomous region, has been nicknamed "The Beekeeping Mayor" for his dedication to the development of a local beekeeping industry.

Chen Wenzhi, vice chairman of General Labour Union of Luohu District in Shenzhen, was sent to work as vice mayor of poverty-stricken Xilin County in January 2017. During the past three years, he has mobilized more than 1,000 poor households to take up beekeeping as a job. So far, over 20,000 beehives have been established in 30 beekeeping bases across the county.

Supported by preferential policies set up by Luohu and Xilin, each poor household can receive a subsidy of 200 yuan for each beehive, which means they can almost keep the bees at zero cost.

Before working in Xilin, Chen knew nothing about beekeeping. To reduce poverty through this activity, therefore, he read many books and learnt from experienced beekeepers in other counties. He even kept a few beehives by himself.

Chen Wenzhi has been nicknamed "The Beekeeping Mayor" for his dedication to the development of beekeeping industry in Xilin County.

As the honey produce gradually increased, a honey processing factory was built and the brand "Shan Er Bao" - meaning "treasure from the mountain", was widely promoted. Meanwhile, the Xilin Beekeeping Association was set up. A complete industrial chain featuring poverty alleviation through beekeeping has emerged in Xilin.

Under Chen's coordination, the Xilin Agricultural Investment Company agreed to secure the honey purchased from villagers at a reasonable price. Chen also encouraged an e-commerce platform to visit the bases and buy honey products, ensuring prompt payments for beekeepers.

To help villagers make more profit, Chen turned to his Luohu base for help and primed some markets in Shenzhen. It was reported that, on August 7, Luohu opened an outlet selling agricultural produce from Xilin and Longlin, another impoverished county in Guangxi. It is part of Luohu's efforts in poverty-alleviation through consumption.

According to Zhao Jinsong, deputy director of Luohu Industry and Information Technology Bureau, more such outlets are expected in the district's supermarkets and department stores.

By April 2019, the county had been completely lifted out of poverty.

To prevent intergenerational transmission of poverty, Chen enthusiastically advanced the establishment of the Xilin Luohu Experimental Primary School. Co-supported by Luohu and Xilin, it promises children great expectations with a combination of traditional culture and modern education.