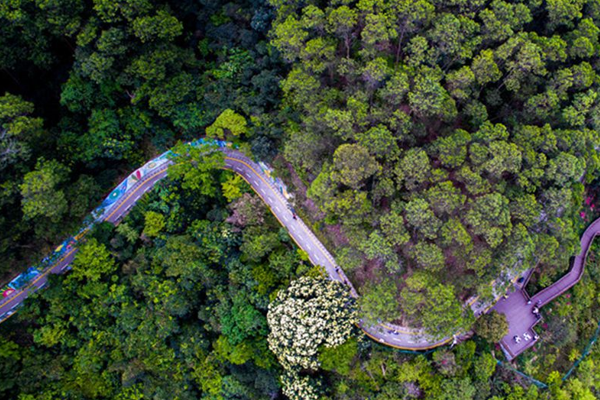 Luohu district has a total of 15 municipal parks and 96 community parks, and the total length of its greenway spans 176.78 kilometers. [Xinhua]

With goals of becoming a key player in the Guangdong-Hong Kong-Macao Bay Area, Luohu district has always regarded its ecology as an integral part of its development plans.

For instance, as the “green lung” of Shenzhen, Wutong Mountain in Luohu is not only Shenzhen’s sole national scenic spot, it’s also a natural urban landscape that combines the coast, mountains and vegetation, an increasingly rare setting in the first-tier cities of China.

Apart from mountains, Luohu also has four lakes – Xianhu Lake, Honghu Lake, Donghu Lake and Yinhu Lake – as well as 20 rivers and canals, including Shenzhen River, Buji River, Liantang River and Qingshui River, all of which stretch more than 76 kilometers.

During the 13th Five Year Plan period (2016-2020), the district made significant progress in water pollution treatment.

Luohu has made concerted efforts to promote the sustainable construction and management of factories, canals, rivers and reservoirs, while eliminating all types of inferior V water bodies, as well as 12 black and odorous rivers, five of which were considered “seriously polluted." As a result, the water quality of all 20 rivers and canals has markedly improved.

Likewise,  Luohu’s government said the district’s air quality is on par with that of the European Union and boasts the cleanest air of any district in the country that has a gross domestic product of more than 200 billion yuan ($30.9 billion).

Shenzhen was one of the first cities in the country that vowed to transform themselves into a zero-waste city. What’s more, Luohu district has been the center of various pilot projects such as one that’s focused on establishing efficient management systems aimed at reducing solid waste from the community health medical industry, catering industry and auto repair industry. Furthermore, the initiative is charged with finding solutions to problems in the treatment and disposal of medical waste generated by community health centers, kitchen waste from catering companies and hazardous waste from auto repair enterprises.

Luohu district has a total of 15 municipal parks and 96 community parks, and the total length of its greenway spans 176.78 kilometers. Its total park green area covers 1,712.1 hectares. The per capita park green area in the district is about 16.2 square meters on average, and the district’s green coverage rate is about 64.6%.