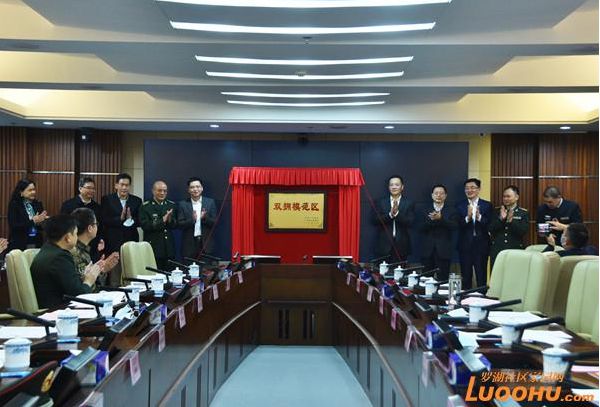 Luohu held a colloquium of district officials and representatives of the People’s Liberation Army stationed locally on Jan. 7. [Luoohu.com]

Luohu held a colloquium of district officials and representatives of the People’s Liberation Army stationed locally on Jan. 7.

In the meeting, some units and individuals in Luohu won the honorary title of models of double support work in Guangdong province.

The double support work in the district, led by the Party, highlights the complementarity strengths of Luohu and the military, stresses the practical effects of the work, and organizes some meaningful activities so as to promote the comprehensive development of the district.

In the meeting, PLA senior colonel Yu Laiyong and Zhao Hua, deputy director of the political work department of the Shenzhen garrison command said Luohu had seen steady economic growth, and the military had actively taken part in local constructions in a bid to achieve development of a new type of close relations between the military, the government, and the people, so that all relevant parties worked together to contribute to national defense and create a better Luohu. Luohu held a colloquium of district officials and representatives of the People’s Liberation Army stationed locally on Jan. 7. [Luoohu.com]

Luo Yude expressed gratitude to supports from the military for Luohu’s development.

He said: “The military is an important power ensuring the stability of Luohu’s reform and development. We will continue to carry on the fine traditions of double support in Luohu to create more tried and tested models of work that can be rolled out elsewhere in the country to further improve the work.”

This, he pointed out was a necessary requirement to defend the baseline of national security, an important foundation to maintain the stability of the Luohu’s reform and development and a key to enhance soldiers and their families’ sense of happiness and gains.

He also called for implementing veteran benefits and placement policies to protect the legal rights and interests of retired soldiers so as to advance Luohu’s double support work to a new level.