On Oct. 14, Luohu arrange for its Party members and civil servants to watch the live broadcast of the grand gathering marking the 40th anniversary of the Shenzhen Special Economic Zone.

On Oct. 14, Luohu arranged for its Party members and civil servants to watch the live broadcast of the grand gathering marking the 40th anniversary of the Shenzhen Special Economic Zone.

President Xi Jinping, who is also general secretary of the Communist Party of China Central Committee and chairman of the Central Military Commission, delivered an important speech at the gathering.

The entire audience felt motivated by Xi's speech and the great achievements of Shenzhen during its development over the past 40 years. They said that they will carefully study and carry out the gist of Xi's speech and work hard to overcome difficulties so as to advance the development of Luohu. 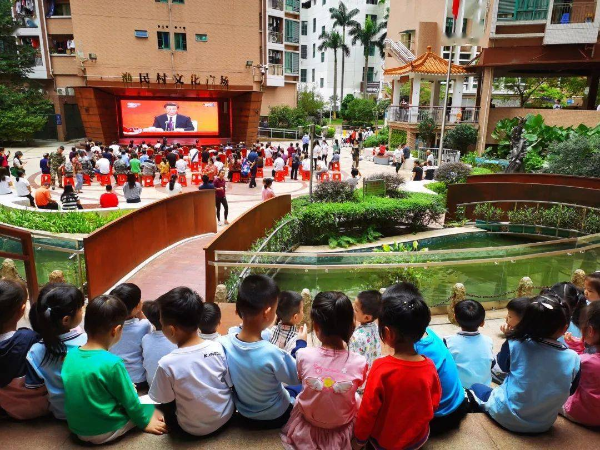 Villagers of the Yumin Village watch the grand gathering.

All 10 sub-district offices also arranged for their staff to watch the program.

Qiu Zhi, Party secretary of the Huangbei sub-district office, said: "I will work harder to promote Luohu's development, serve the people, and implement the gist of Xi's speech in a down-to-earth manner in grassroots work."

After watching the program, Liang Hao, deputy director of Luohu's shantytown renovation project, said that the project participants will bear Xi's hopes and wishes in mind and work harder, so that more Luohu residents can live in better accommodation.

Huang Xingyan, deputy general manager of Yufeng industrial company, who watched the speech together with more than 100 villagers of the Yumin Village, said: "We were excited to listen to Xi's speech, and it reminded me of Xi's visit to our village eight years ago."

Li Yongxia, a member of the Luohu people's congress, the district's legislature, said that new generations must carry on the pioneering spirit to create a better future for Shenzhen.