On Sept. 8, an important meeting was held in Beijing to commend role models in the country's fight against the COVID-19 epidemic. Duan Yufei, director of the Health Commission of Guangdong Province, received an award from Chinese Premier Li Keqiang.

The CPC Guangdong Committee was commended as an outstanding primary-level Party organization. This honor belongs to all the medical staff in Guangdong, Duan said.

Not long ago, sporadic COVID-19 cases were reported in the cities of Shenzhen and Lufeng. Under the guidance of Guangdong Provincial COVID-19 Prevention and Control Leading Group, the situation was under control within just half a month. 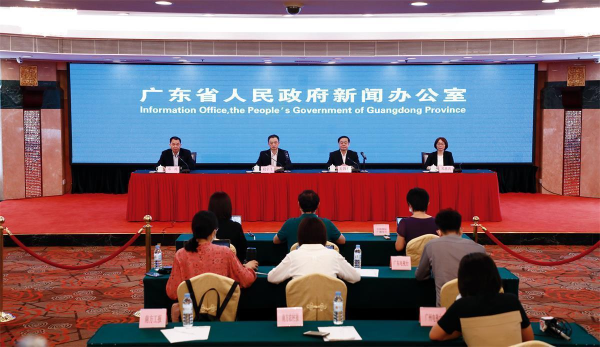 With a rapid, precise and efficient response, Shenzhen has set an example for other cities in dealing with a COVID-19 resurgence. It is also served as a valuable lesson for if the virus should return during the upcoming autumn and winter months.

The alert was prompted after a 41-year-old woman, who worked at a Freshippo store in Luohu district's IBC mall, returned to her hometown of Lufeng city and tested positive for the coronavirus on August 13.

It was the province's first reported locally transmitted case in 107 days.

The emergency response mechanism was activated immediately. All medical staff in Luohu were mobilized to curb the spread of the epidemic.

Close contacts were spotted and put under collective quarantine. Freshippo stores, residential communities and aquatic markets were all placed under lockdown. All staff in the named Freshippo store were tested for the COVID-19, and two were found positive. The mother of one of the two cases also tested positive. All three were identified as asymptomatic cases. The situation could have been much worse without the timely response. It was reported that on August 14, secretary of CPC Luohu Committee Luo Yude presided over four emergency meetings to arrange the work of epidemic control. More than 1,000 medics and 3,300 civil servants were organized to battle the virus.

On August 15, city-wide nucleic acid testing was launched in Shenzhen.

Since 2016, Luohu Hospital Group has been inviting professionals from Luohu Center for Disease Control and Prevention to guide their work in residential community health centers, and now all its general practitioners are trained in this field.

During the busiest time, 1,743 medics were working at 62 sample collection sites in Luohu. The Health Commission of Shenzhen Municipality sent 600 nurses and 300 testing staff to support the district.

Shenzhen municipal government required all its districts to establish their own epidemiological surveying teams and each hospital to possess a nucleic acid sample collecting team. Residents living near the Freshippo store in IBC mall get tested for the COVID-19.

By August 27, about 743,000 samples in Shenzhen were collected and all tested negative except the three asymptomatic cases earlier reported.

On the same day, 10 Freshippo stores in Shenzhen resumed operation. Another ten opened on August 29. The Freshippo store in IBC mall began to welcome customers again on September 1, with more cautious protective measures put in place.

The life of Shenzhen residents was back to normal, again.

"The world is facing severe and complicated challenges as the COVID-19 continues to spread rampantly. The task of preventing cases abroad from entering Guangdong and causing a resurgence is quite tough," noted Duan.

According to Duan, Guangdong province will exert more efforts in regularized epidemic prevention and control and be more prepared for possible epidemic rebounds in Autumn and winter.